2. The Referee must stand where they have a clear view of targets and competitors.
(a) For Trapshooting, preferably between lanes 2 and 3, approximately 2 metres behind the competitor’s shooting mark. If there is excessive background noise the Referee may move between lanes 2 and 4 in order to hear the competitors call so as to give all competitors equity of competition.
(b) For Skeet shooting the referee should stand in the position indicated in the following field diagram: 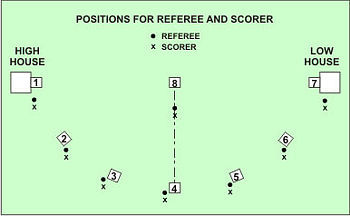 4. The Referee should ask their scorer to stand close enough to them so that the Referee can see the score sheet, and the scorer can observe the target as a check Referee.

5. Target to be shown by Referees,

(c) For Trapshooting, if it is a six person squad and there is to be 1 target per shooter eye-opener, number 6 shooter must move up to take the first target, but they must still be shown a target on their call before they shoot at their eye-opener target.

6. The Referee must at all times ensure that the target is released immediately on the competitor’s call.

7. The Referee must clearly call the result thus: one, two, lost, no target, as appropriate.

8. Lost targets must be called immediately, and the Referee must change their decision if the target breaks before it hits the ground.

10. At all times ensure that no competitor leaves a cartridge(s) in his gun after a red signal from the traphouse (breakdown etc) and when moving from lane 5 to lane 1.

11. A shooter must walk in front of the Referee when changing from lanes 1 to 5, taking care not to obstruct the Referee in the execution of their duties. From 5 to 1 they should walk behind where possible.

12. The Referee must speak to a shooter immediately on any breach of the safety rules. If the rules of etiquette are broken the Referee should speak to the shooter concerned after the squad has finished, depending on the circumstances.

13. In Single Barrel competition the Referee must ensure that one cartridge only is placed in the gun.

15. The Referee should be mindful of the rule regarding squad members disturbing the competitor shooting.

16. A Referee will not call "No Target" to deny a shooter the opportunity to shoot at a whole target unless a safety hazard exists. The shooter is the only person to decide if the target is acceptable to him.

(a) A shooter may refuse to shoot at any target which they considers to be illegal.
(b) There is no limit to the number of targets the shooter may refuse as long as the Referee agrees with the reasons.  Obviously, if too many targets are refused for illegality, the Referee must find the cause, then correct it.  If the Referee does not consider that the target refused is illegal, they will ask the shooter why they refused the target.  If the Referee is not satisfied with the reason they will tell the shooter.  They will also state that any further targets which are refused, and are considered by the Referee to be legal will be scored “Lost Target”.
If the above situation seems likely to arise, it is preferable that a third party, qualified if possible, adjudicates subsequent refusals.  The foregoing procedure in no way discriminates against Referees using their judgement, it is meant to assist in equity of competition.
A major point often missed by Referees is that although a shooter may refuse to shoot at an illegal target, they are equally entitled to accept an illegal target.  However, if they shoot at and misses an illegal target, the only decision open to the Referee is “Lost Target”.  Similarly, if they hit it “one” or “two” is scored, abide by result.
(c) A Referee should not call “No Target” for a fast or slow released target, nor if the target seems to them to be too high, too low or too wide. “No Target” should only be called in the case of a broken target, a pair of targets emerging instead of a single (or vice versa), or where a safety hazard exists if a shooter elects to shoot at the target.
(d) Referees are to ensure that “R” for refusal is entered on scorecards. Every refusal must be called either “No Target” or “Lost Target” by the Referee.

18. The Referee is to see that all competitors remain as a squad until the last shooter has finished.

19. At the completion of each visit to a trap the Referee must request competitors to unload their guns and check their scores.