Sporting clays is a very testing and popular sport.  Unlike Skeet and Trap, which have set target trajectories that are the same at every range, sporting clay targets are thrown from nume 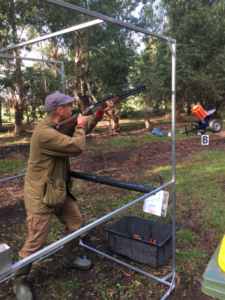 rous traps set out in random fashion over a large area with each club and competition vastly different.

The targets, varying in size and shape to add to the variety and challenge, are thrown either as singles where two shots may be fired, or in combination of pairs where only one shot per target can be fired.  Targets can be thrown at slow or fast speeds in varying heights and directions and can be launched as going away targets, incomers, quartering, crossers, from towers, in amongst trees or in open fields.  Other variations include “springing teal” that climb vertically, “battues” that turn at the end of their trajectory or “rabbits” that run along the ground.

Targets may be close or as far away as 50 metres.  Every shooter gets the opportunity to see the targets first before shooting, and all shooters have to shoot the same targets and combinations.