A round of skeet consists of 25 targets shot on a semi-circular layout with two trap houses, the left being the high house, the right the low house.  There are 8 shooting stations.   One shot only may be fired at each target.  Squads consist of 5 shooters, each takes their turn to shoot from a position known as a pad.  These are numbered from 1 to 8.  From each of these stations a single target is released from each house on the call of "pull".  The shooter may have their gun on or off their shoulder as they choose. 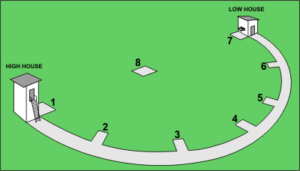 After the competitor has shot their two single targets from stations 1,2, 6 and 7, they remain on the pad and shoots a "double", i.e. two targets are released simultaneously, one from each house, one shot is fired at each target.

If at any time during a round a competitor misses a target they then reload one cartridge and repeats the first target that they have missed; however, if they get to station 8 and has broken all of the 24 previous targets, they then repeat their last target to complete the 25 target round.