Things are starting to return to normal at Melbourne Gun Club for students from Lilydale High school. We are happy to recommence our sponsorship of students from the High School on Wednesday afternoons.  There has been a high level of interest displayed by many new young shooters this year.   Although most of our new members have never shot a gun before and have only attended one or two sessions they have all shown some considerable talent.  We are hopeful that if they choose to continue with the sport, we will have some potential stars in the near future.  The new participants have been mostly year 7 boys and girls with a few year 8 students as well

Below is a picture of a squad of new shooters, some about to have their first shot at a clay target:

Most of the school’s previous participants have now returned, and have quickly returned to their previous skill levels, despite an almost 12 month absence from the activity.
One very notable student is Ben De Pedro. Now in year 9, Ben has really only been shooting for a bit over 2 years. Last weekend he took part in the 3 day shooting competition, the “Yarra Valley DTL Championships” here at Melbourne Clay Target Club. Ben won the overall B grade “Top Gun” competition, this is an impressive effort for such a young competitor against some very competent adults. This also meant that he was promoted to A Grade Status. We wish him well at this new level of competition, and as he continues to improve, hope that he rises to the top as an A grade shooter. Below is a picture of Ben after the recent “Yarra Valley DTL Championships”: 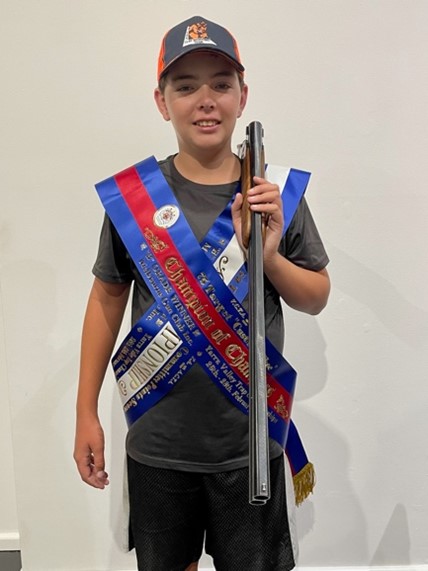